The person whose imagination I live inside of has asked me to tell you about some fellow writers whom we both admire. The reason for this is that one of them is literally fictional. So, basically, like me. My host thinks that if I explain the relationship between these three writers, both you and I will better understand who I am.

The first fellow was named Theodore Sturgeon. He was a real-life science fiction writer. The second was another reality-based author named Kurt Vonnegut, who wrote both scie 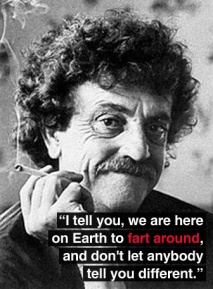 nce fiction and (normal?) fiction. Mr. Vonnegut was a contemporary and fan of Mr. Sturgeon, calling him “One of the best writers in America…certain to fascinate all sorts of readers, not only science fiction fans.”

The third fellow was named Kilgore Trout. He was a recurring tragicomic science fictional character (and science fiction author) that Mr. Vonnegut invented using his mammalian brain. The reptilian part of his brain may have helped, too. Mr. Vonnegut loosely based this imaginary person on the character that controlled Mr. Sturgeon’s body.

Now both Sturgeon and Vonnegut are dead. According to Science, a person is dead when their body becomes a corpse. When we die, we no longer experience anything or exist. If that is, in fact, all there is to it, then Vonnegut and Sturgeon are no more real now than Kilgore Trout.

Personally speaking, I don’t know whether becoming a corpse leads to extinction because Science is not my Religion. And the fact is, Science ignores facts it finds inconvenient. Physicists can be as superstitious as priests.

One day, Mat Thomas will be dead. I don’t know when that day will be, but I know for sure that it will come. Then, according to Science, he will be no more real than, say, Kilgore Trout. Or me.